New year, fresh start and a ton of disclosure

An update on the Ingrid Skyberg series
A few people have been asking me when the next Ingrid Skyberg book will be finished. As the situation is quite complicated, I thought I’d write a whole ruddy blog post to explain what’s going on with me.

Though I’ve been working on the book since the middle of November, I was forced to step away from my laptop a week or so before Christmas because of severe pain and the effects of strong painkillers (fuzzy head, nausea, etc). As you can imagine, I’m very frustrated not to have the second draft wrapped up by now and winging its way to my editor for tweaks and suggestions for improvement.

As things stand, I have about a third of the story written.

Severe pain, strong painkillers, pah! you might say. Stuff and nonsense. Well, there’s quite a lot more to it than that.

A bit of background
If you’ve been following my indie publishing adventure, you might know that I published my first book – The Loyal Servant – at the end of 2011. It got off to a slow start, sales-wise, but was doing quite well by March. Meanwhile, I’d started drafting The Third Estate (now called The Deadly Silence). I was really getting into the whole indie publishing thing. It was hard work, but fun and rewarding. It felt like I’d finally found my true vocation.

Then the bomb dropped. At the end of May 2012 I was diagnosed with cancer, putting my writing plans on hold. I had quite intense treatment in August and September of that year, making it impossible to write. But I did manage to get back to work a month or so after that. 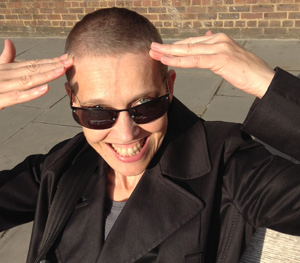 One of the many ‘dos’ I’ve sported in the last 18 months – this was taken fresh out of Mr Toppers!!

The Senior Moment was published early 2013. And The Third Estate came out in the summer. Then I found out the cancer had come back. And spread. More treatment followed, but this time it was about managing the disease rather than curing it. As the treatment was set to take around five months, I knew I had to carry on writing at the same time.

I decided to start the thriller series I’d always wanted to write – featuring a kind of female Jack Reacher as its protagonist. So I wrote Fresh Doubt, the first Ingrid Skyberg novel, which I published in February 2014. In May my health took another dip, but I switched from my desktop computer to a sofa with my laptop and by the middle of November I had completed two more novels, a novella and collection of short stories.

Then I started to write book four (as yet untitled) in the series, putting in as many hours as I felt able. I was really enjoying the writing process until I was forced to stop. Which is where this blog post started.

Stockpiling stories
I now have a choice: with the time I have left (I don’t know how long that is) do I finish book four, or do I push on and write as many first drafts of Skyberg novels as I can (I already have several mapped out in my head)?

After a great deal of thought, I’ve decided on the second option. The question then is, who will give them a polish and get them ready for publication? Thankfully, I have a very good answer.

Team Skyberg
As some of you know, I have collaborated on The Hollywood Detective mysteries with my long term developmental editor, Jo Monroe. It just so happens that Jo’s day job is ghostwriting, which means she knows all about the importance of getting the ‘voice’ of the author just right. It’s one of the reasons why I trust Jo to put the finishing touches to the manuscripts. Another reason – and the most important one – is that she loves the Skyberg series as much as I do and will definitely do Ingrid justice.

So… although I can’t answer the question about when book four will be out, I can say we’ll be doing our best to get it done asap.

What I also hope to do is give regular updates on our progress using a combination of this blog and perhaps a podcast and the occasional video. It’ll also be a chance for you to get to know Jo a bit better – she is going to be my trusted lieutenant, after all!

Tune in for further updates.