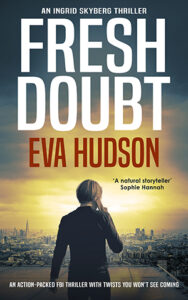 Special Agent Ingrid Skyberg was the last person to see her best friend alive when they were fourteen. The haunting memories of that night shaped Ingrid’s life, driving her to become one of the toughest agents ever to join the FBI. Supremely fit, doggedly tenacious and virtually indestructible, Ingrid now works out of the US embassy in London.

Madison Faber, a brilliant psychology student at a prestigious London college, has discovered her friend’s body in a pool of blood. Now she’s in police custody being questioned for murder. Protesting her innocence, Faber fears the killer will target her next and persuades Ingrid to hunt him down. But the deeper Ingrid digs, the deadlier the case gets. And when she uncovers a sinister group operating within the psychology department, Ingrid is in far more danger than she realizes.

Up against the clock, and disobeying strict FBI protocols, Ingrid’s obsession to bring the killer to justice takes her far beyond the law. So far she may never get back.

Unlock the thrills and twists of this up-all-night crime thriller series, perfect for fans of gripping mysteries, strong female detectives and any reader who has ever wondered if there’s a female version of Jack Reacher. There is, and her name is Ingrid Skyberg.