I dedicated Final Offer, the latest Skyberg investigation, to the brilliant women I play football with, and tomorrow night on BBC1, you can watch some of my team mates play when Inside Out reports on the Old Girls’ World Cup which took place in France this summer. 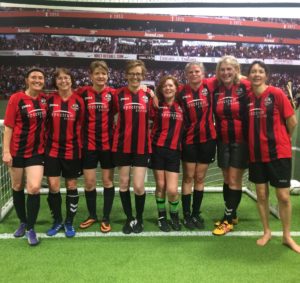 Ingrid joins an over-35s football (soccer to some of you) in Final Offer because I needed to give her some friends outside of the embassy. I also wanted to show how much fun playing sport in your thirties, forties and fifties is. For me, and for many of the women I play with, it’s not just about fun and fitness, it’s about friendship.
A few months after Eva died, one of my neighbours – who is now one of my best friends – got me out of the house by saying I should play football with some of her mates on a local school’s playing field. I didn’t know anyone else there, and didn’t know if I could play (I can’t really), but week by week I got a bit better, gained in confidence, left the house more and met a bunch of the most fantastic women. I really, truly believe playing football was the best form of grief counselling and I’m so grateful I was allowed to join the gang.
Four years on, we now play under floodlights, have regular coaching sessions and take part in the growing number of Women’s Recreational Football tournaments around the country. You can see how much it means to everyone who takes part in this clip from tomorrow night’s broadcast.
https://www.bbc.co.uk/news/av/uk-england-kent-49681983/the-missed-generation-of-women-s-football
Inside Out, BBC1, 7:30pm, Monday 16th September (only in the South East, available on iPlayer everywhere else).