Way back in June I released a preview of the audio version of Fresh Doubt. It only took another four months but the finished product is now on sale!! I really believe it’s been worth the wait. 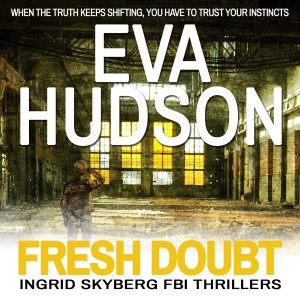 Eva always wanted to get audio versions of the Skyberg books recorded, but when she became ill her priority was to write, write, write: there simply wasn’t time for her to do the audiobooks too. It obviously feels a bit weird for me, knowing that she’ll never hear them, but it also feels pretty special that I have been able to fulfill her wishes.

Long time fans of Eva’s will remember that Fresh Doubt was the first Ingrid Skyberg FBI Thriller she wrote, so even though it is officially the second book in the series, it felt like the right book to record first. Over the coming months, I’ll arrange for the rest of the Skyberg books to be recorded and released.

If you haven’t already, you can listen to a sample chapter here. It’s narrated by Victoria Grove who has done a fantastic job with all the different characters and accents. I particularly like her interpretation of Angela Tate. In fact, now I know what Angela sounds like, it has made writing her character so much easier. Yes, Angela crops up in the new book too.

If you’ve never listened to audiobooks before, you can start a free 30-day trial with Audible and listen to the entire book. Or if you prefer to buy a copy, it is now on sale at:

I’d love to know what you think of the audiobook. Feel free to drop me a line.

And now… I must put the finishing touches to the new book. You won’t have to wait too much longer.