Inside my writing process (so you don’t have to be)

When Steve Robinson (he of the ingenious Jefferson Tayte genealogical mysteries fame) asked me if I wanted to take part in a blog tour to discuss the writing process, I jumped at the chance.

I could bore for England on the subject (actually that’s not strictly true – my specialist subject would be the machinations of indie publishing – now that’s really when I see people’s eyes glaze over). As I’m interested in other writers’ methods, I’m hoping someone might just be interested in mine (if not, bail out now!). 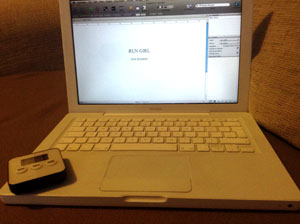 The laptop, the timer and the comfy sofa

The idea is that each of us answers the same set of questions so that readers (and fellow writers) can compare and contrast methods and processes. I’ve now made that sound incredibly dry and tedious! Really, it’s not.

Before I plunge into the questions I’d like to point out that I’m an outliner rather than a make-it-up-as-I-go-along pantser, but not all of the original outline makes it into the final draft. I have outlined all of my published novels to date, and I’m pleased to say the outlining is getting more rigorous, which means that the number of rewrites has gone down from eight or nine (The Loyal Servant) to around four or five (Kill Plan).

Apparently, Lee Child is a pantser who only needs to write one draft. How I envy his writing process!

WHAT AM I WORKING ON?

Now that I’ve just published the prequel novella to the Ingrid Skyberg series, Run Girl, I’m back to concentrating on the as yet untitled third novel of Ingrid’s adventures in London. I’m just under 50k words into it and very excited to get to the final phase and the big finale. I know how the book ends (I am an outliner, after all) but I’ve left myself some leeway with the details. Which could mean the final section will be a complete bugger to finish and take longer than the whole of the rest of the book, or the words might just fly off my fingers (I wish). That’s the exciting thing about creating something from nothing – you just don’t know how it’s going to go.

HOW DOES MY WORK DIFFER FROM OTHERS IN ITS GENRE?
I suppose the biggest difference is the absence of fight scenes and car chases. Although I’m writing thrillers, they’re much closer in style to crime mysteries than action and adventure kick-ass extravaganzas. Ingrid Skyberg isn’t generally faced with the dilemma of how to save the world from impending destruction in the next 24 hours, but she does have to solve a crime and bring the culprit to justice (by fair means or foul).

Of course, Ingrid can kick butt when she needs to, but she’d rather use her fitness and parkour skills to escape trouble, rather than wade right into it (which is where she differs from Jack Reacher, or indeed Xena, Warrior Princess).

The other main differentiator is the FBI agent in London element. I wanted my heroine to be a fish out of water, to have to deal with an alien culture and a whole new landscape as well as solving crime and fighting for justice. As I’m a native Londoner, it made sense to set the books in my home town. Happily, the American embassy does include a whole section of FBI agents as part of its Legal Attache program. So that made choosing Ingrid’s profession very easy indeed.

WHY DO I WRITE WHAT I DO?
I’m not sure I should admit this, but hell – this is just between you and me, isn’t it? So why not. Many years ago I picked up The Da Vinci Code after seeing so many people reading it on the Tube and wondering what all the fuss was about. Previously I’d always enjoyed a good police procedural and a puzzling mystery, but more on TV than in written form. I was a big fan of Cagney and Lacey, Prime Suspect, Cracker etc, but I’d only really read the odd Miss Marple and a Wilkie Collins.

Dan Brown’s bestseller was a bit of a revelation – it was the archetype fast-paced page turner and though I was a tad disappointed by the resolution, I thoroughly enjoyed it as a reading experience. It was pure escapism. It left me wondering if I might one day have the chops to write a thriller of my own.

I’d wanted to write stories since I was a child and as I knew I didn’t have the skill/patience/intellect to write literary fiction (I also wanted to write books that had the potential of selling by the truckload) I knew I’d be a genre writer. The only genre I was familiar with was crime, so it made sense to write mysteries and thrillers.

Now that was a longwinded way of saying I just wanted to write what I would like to read. So, moving on…

HOW DOES MY WRITING PROCESS WORK?
I get ideas from all sorts of places – newspapers, websites, radio, non-fiction books, overheard conversations on the bus… but the difficult part is turning any one of them into something that can sustain a 70-90k word novel. Usually an idea for a story will keep niggling at me so much that I can’t ignore it. I got the idea for the book I’m currently working on listening to a news report on Five Live!

Then it’s time to write everything I know about the story in a big old yellow notebook (thank you, Paperchase!). I’ve used this technique ever since reading 2k to10k by Rachel Aaron – which I highly recommend for writers everywhere. Then I move on to Scrivener – a fantastic (and really quite inexpensive) bit of software designed especially for writers. I use the cork board function and write scene/chapter ideas on a series of index cards (I used to use real ones, but that got a tad messy). Those cards then get more detail added to them as the story grows, and I add more cards, incorporating a three act structure, with major turning points leading into each act.

When I have a complete set of cards taking me from beginning to end, I start writing. Sometimes I jump into this part sooner than I should, without everything worked out, but I can’t help myself – I just want to get started on the story. Then it’s just a question of a slow beginning, hoping to build momentum as I go. It’s certainly true for me that the more I write, the more in the ‘zone’ I am and the easier the process becomes. Pecking away at the odd two or three hundred words here and there (which is the way some people have to write because of work and family commitments) I find doesn’t help at all with my creative process. Having said that, writing something each day, however little, is much better than skipping a day. It’s so easy to lose confidence in both your idea and your writing if you don’t write regularly.

When the first draft is finished (hurrah!) I leave it for a week or so, then make notes and start on the second draft. Then I might repeat the process and write a third. After that it’s off to the structural editor for comments. Another draft. Followed by a polish. Then it’s sent to beta readers to find out if the story truly works – I ask them whether the pace/character motivation/narrative drive cuts it. Then after their feedback it’s more tweaking, another polish and off to the proof reader/line editor. Then it’s formatting (something Scrivener makes SO easy), designing the cover, writing the book description and finally uploading to the major book selling platforms. And then? Start the process all over again!

If you stuck with this rambling explanation of my writing process to this point, then I salute you! You have incredible strengths of endurance – have you thought of participating in a triathlon?

WHO’S NEXT?
Next up is Douglas Dorow – he’s an American crime writer who also specializes in FBI thrillers. His first book in the Jack Miller series, The Ninth District, was a runaway bestseller. With more Jack Miller books in the pipeline and the first of a spin-off series of novellas, Supercell, to be published soon, you should definitely check out Douglas’ books to get your fix of page-turning, fast-paced thrills. You can find more information here: http://www.DouglasDorow.com