Life after Broadchurch (and what next for Miller and Hardy?)

So, that was it – two months of compelling TV drama – and a ruddy big hole to fill at 9 o’clock on Monday nights.

ITV were brave in their scheduling – one episode per week, over EIGHT weeks and none of that ‘Next on Broadchurch’ nonsense that spoils the whole of the following week’s storyline. Thankfully the schedulers decided that we the viewers did have big enough attention spans to last the course.

The first episode of Broadchurch clashed with the second episode of BBC1’s Mayday (I know – remember that?) which went for the five episodes on consecutive nights option and failed miserably.

But Mayday didn’t have: the brilliant writing, superb acting, stylish direction, stunning cinematography and even the Killing-style soundtrack of Broadchurch and all of that kept us glued to the box. So it was an unfair contest really. (Note to TV drama commissioners: if you reward us with high quality programmes, we will reciprocate with our loyalty).

Broadchurch had the power to make us laugh (very occasionally, usually at Miller and Hardy’s relationship) cry (a hell of a lot) and most of all care. Who couldn’t feel for what the Latimers were going through?

And what about the sheer bravado of revealing the killer’s identity so early on in the final episode? Part of me was expecting a cheesy reversal five minutes before the end, but thankfully it didn’t happen. We just saw the impact the arrest had on the community – well done Chris Chibnall. More please.

And speaking of more: Twitter went wild with the #broadchurch hashtag last night. It truly was event television (the thing that’s not supposed to happen for drama). And we discovered that Broadchurch will return! (series two will go into production next year). But in what format? If it’s still called Broadchurch we can’t have DS Miller and DI Hardy, and frankly, I’m not sure I’d care nearly so much. We’ve invested in a cast of characters – not a fictional village on the Dorset coast.

So what’s it to be – Ellie and Alec join forces as private investigators (as a Twitter friend suggested last night)? It was quite a poignant moment, both of them excluded from the torchlit vigil, sitting on a cold bench together. 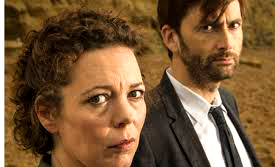 This is what creator and writer Chris Chibnall had to say about the second series: “The whole Broadchurch team has been delighted and properly gobsmacked by the response from ITV viewers. When I first talked to Peter Fincham and Laura Mackie, ITV’s Director of Drama about Broadchurch, I mentioned that if people liked it, there was another very different story we could tell afterwards. I’m really thrilled we’re going to tell that story too.”

So “a very different story”. That could mean pretty much anything. It certainly doesn’t rule out a return for Olivia Coleman and David Tennant (yippee).

Well done cast and crew of Broadchurch and ITV – you played a blinder.

PS Why WAS Danny arguing with the postman?