A bit of a surprise from Eva’s computer!

Lauren stretched out a hand in the darkness, expecting to touch the wall next to the apartment door. But it was further away than she’d expected, she stumbled forward.

Her voice cracked on the second syllable. She cleared her throat. It felt raw. As if she’d been shouting. Screaming even. She reached again for the wall and this time felt the greasy textured wallpaper beneath her fingertips. Groping for the light switch she took a shaky breath and tried to speak again.

Her left thumb made contact with the switch plate and she quickly located the rocker switch of the light, pressing the bottom toward the wall. That was right, wasn’t it? The opposite way to back home. Nothing happened. She tried the other way. A dull click and nothing more. A gasp escaped her mouth. 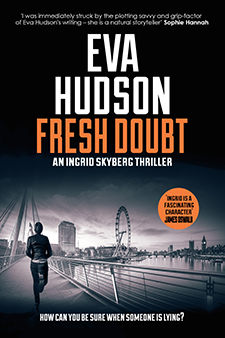 She gulped another breath then listened, desperate to hear a snort, or a laugh, quickly followed by a soothing, reassuring word. Perhaps even an apology. Something. She strained her ears, turning her head slowly left then right. Nothing.

She blinked hard and an unexpected tear pushed its way out of her left eye.

She started to shake. Why was she feeling this way? Who turned out the lights? Was the whole house in darkness? There were eight small apartments in the building, surely one of the other residents would do something to fix the power cut. She reached out again and fumbled for the door latch, wrapping her aching fingers around the cold metal. The latch rattled uselessly clockwise and counter. If the lock was broken, how did she even get into the apartment in the first place? She struggled to remember, her mind foggy and distracted. She managed to recall walking down the street, turning into the front yard and skipping up the steps to the front door. Then she drew a blank. How long ago was that? Minutes? Hours.

Goddammit, why couldn’t she remember?

“Is there somebody there?” She raised her voice and leaned close to the door. “Hey! Can anyone hear me?”

She held her hand in front of her face, straining to make out the shape of her fingers. Why were her hands aching? Her forearms too. She let out a cry. More of a whine. What was happening to her?

“Are you in here? Stop this now! I don’t want to do it anymore.”

She thumped the door with a fist. A sharp pain shot up her arm. She stood motionless for a moment and listened for noises in the hallway outside the apartment, or the floors above and beneath. In the fews weeks she’d lived here, she’d never known the house to be so quiet. People were always coming and going, slamming doors, playing loud music. The four-story Victorian walk-up hummed with life right around the clock. So what had happened tonight?

She took a deep breath, closed her eyes and tried again to remember what happened between closing the front door and standing here in her hallway. She tried to force her mind to conjure visions of the journey up the first flight of stairs, the worn carpet alternately threadbare or sticky beneath her feet. Hard as she tried, the memory wouldn’t come.

Stretching out her arm again she traced her fingers along the apartment hallway wall until she reached the door at the end. She found the doorknob right away, turning it quickly and pushing open the door in one movement.

The main living area of the studio apartment was almost as pitch dark as the hallway leading to it. But this room had a large window opposite the door. Dim slivers of light from the street lamps outside leaked into the room around the edges of the window shade. Not enough for her to make out much more than the looming shapes of the armoire, couch and desk, but enough to calm her jittering nerves a fraction.

She sniffed in a long breath. There was a smell. A smell she hadn’t noticed before. Damp and loamy like a forest floor after rain. An aroma of home. The woods beyond the ridge just a few hundred yards from her family’s vacation cabin. She felt an overwhelming homesickness she hadn’t experienced in all the months she’d been in London. She wanted to be scooped into the arms of her father, reassured that everything was all right.

A sound then. In the hallway. She swallowed, and slowly turned toward it, suddenly unsure whether or not she should feel relieved.

“Enough, now,” she said, her voice still quaking. The silence returned. She shook her head and shuffled carefully back toward the door. “That’s enough now.”

Another sound. This time from inside the room. She spun around. Too fast. Her head started to buzz, her legs buckling under her. She flung out her arms, but swiped only empty air, crumpling in on herself like a collapsing house of cards. Tears pushed through her thick lashes and dropped heavily.

There was an animal grunt somewhere close by. She shrieked and scrambled to her feet, punching wildly at the space surrounding her. Her left hand made contact with something hard and cold. The floor lamp crashed to the ground. She spun again, arms wide, jabbing her fists in all directions.

“Get away from me!” she screamed.

A blow, hard and fast into the small of her back had her lurching forward. A rocket of pain swept up her spine and into her head, as if it might explode from her shoulders. Another blow, more like a kick, this time up high across her ribs and she was falling. Dropping fast.

Her head crashed against the corner of the glass and steel coffee table. She felt the sharp metal pierce her temple and sink into the bone beneath. Slumped on the floor, unable to move, she stared into the darkness with wide eyes, the dim outline of the window visible just a few feet away.

A moment later the faint gray deepened into black.