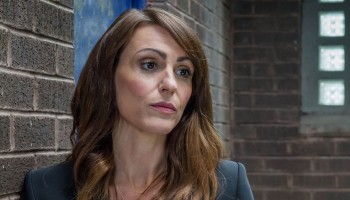 The pressure’s on for DS Bailey

Though the fourth season didn’t get off to the start that season three did (Nicola Walker’s performance would take some beating) I still have high hopes that the series will unfold in a satisfying way. Despite my misgivings about episode 2.

Episode 2 review
The second episode was a little different to most as the first ten minutes or so were spent in the incident room as we listened to the team discuss their latest case (and the first with newly promoted DS Bailey in charge) at length. It was refreshing to watch as the facts were argued in real time. It almost felt like we were peeking inside a real police station (I say almost as I’m sure any detectives would tell you investigations are NOTHING like that). Great not to rely on action sequences and quick edits to create dramatic tension.

Issues
However, I had a bit of a problem with this storyline. As I watched Rachel struggle with her new responsibilities (not helped by her knob head tendencies or constant interference from her predecessor) I couldn’t shake the feeling that something wasn’t quite right with the plot. And I’m talking ruddy gaping PLOT HOLE.

Now, here’s my question:- surely when the DNA results for the unborn baby and the husband were compared right at the beginning, there would have been a partial match. Presumably enough to cast suspicion on the husband’s family from the get-go? If the father was the husband’s brother, those two brothers would have similar (though not identical) DNA profiles.

Or is my limited knowledge of the human genome sending me off in the wrong direction entirely?

I know Scott and Bailey isn’t your typical cop drama – it’s meant to be more character than plot focused – and that’s what appeals to me – but plot holes you can drive a bus through?

Any thoughts on this much appreciated.

DCI Gill Murray
Shocking news right at the end of the episode: Gill Murray is retiring! No! It can’t be allowed to happen. I’ve always thought the series should be called Scott, Bailey and Murray – it has less of a ring to it, but without Godzilla the series wouldn’t be half as good.

Is there a petition we can sign to stop it happening?

You can catch up with episode 2 on ITV Player until October 16.