If the first episode started with a bang, flinging us into the lives of Janet Scott and Rachel Bailey twelve months after series 2 ended, then episode 2 was all about filling in the blanks.

[SPOILER ALERT: Some plot points revealed here. If you haven’t seen episode 2 yet, you can watch it on ITV Player until 9th May.]

The murder of Nick Savage
The evil presence of Rachel’s ex continued to be felt as, following the arrest of her brother Dom for Nick’s murder, Rachel herself is put into the frame. Suspended from her job, facing a possible murder trial, the DC’s life is turned inside out and upside down. And even after Godzilla paints a terrifying worst case scenario for her Syndicate 9 detective, you’ve got to believe with DCI Gill Murray in her corner, Rachel will survive anything.

That ‘who is Rachel’s mother’ moment
Though it didn’t exactly deliver on ‘why was Rachel Bailey pulling that face’ (though I suspect the ‘Corrie Moment’ suggested here was the real reason) we did get to witness the mother and daughter reunion we’d been so tantalised with at the end of the last episode of the previous series.

Stuffed full of glowering looks, resentful half-statements and nary an iota of guilt from Sharon Bailey, I personally wasn’t disappointed by the way the scriptwriter (Sally Wainwright her very own wonderful self) handled the scene. Naturally the two blinding performances by Suranne Jones and Tracie Bennett helped pull it off too.

The marriage of Rachel and Sean
The doubts (and general boredom) expressed by Rachel about her eleven-ish-month-old marriage to Sean the Plod in episode one were well and truly fleshed out in last night’s episode. Sean was her rock when she needed one and it seems she agreed to marry him more out of gratitude and a needy sense of loyalty than anything else.

Will she make the marriage work now? Does she even want to?

Janet’s promotion to DS
Although we got to see a little awkward interaction between Janet Scott and husband Ade, making it clear their marriage was beyond saving, we didn’t get very much of Janet’s backstory at all.

She’s previously made it quite clear she isn’t comfortable with the whole promotion thing, yet she was very happy introducing herself as Detective Sergeant every time she got the opportunity to wave her warrant card in someone’s face.

Presumably this blank will be filled in upcoming episodes. 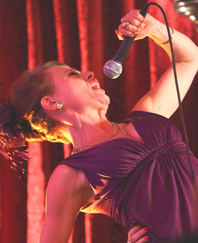 The wedding singer
Funniest moment of the episode has to be Sharon Bailey’s rendition of Queen’s Don’t Stop Me Now. Hogging the karaoke machine and wearing a plunge-topped, high-legged satin dress, Tracie Bennett succeeded in wowing the male guests, embarrassing her daughters and singing convincingly out of tune (she’s played Judy Garland on Broadway) to pretty much steal the show.

A fab reminder that Scott and Bailey can do comedy as well as tragedy.

Once again this was a great episode leaving me wanting more. Congratulations to Sally Wainwright, who continues to be one of (if not the) best TV writer around at the moment.

Just one gripe – and a plea to ITV – can we please get rid of the ‘Next time…’ spoilers at the end of every episode? It’s not happening with Broadchurch and I think the series is stronger for it.

I’d like to be surprised by what happens next. Wouldn’t you?