Episode 8 was fraught with tension as an unstable Helen Bartlett tried to drag Gill Murray into her suicide plans. Yet again Nicola Walker played a blinder. I’m thinking a BAFTA nomination is on the cards for next year. The finale brought Janet and Rachel back together again (was there really any doubt?) patching up their differences over a glass of red wine in the pub in the middle of the afternoon.

A round-up of the series
The cliffhanger mystery of Rachel Bailey’s mother’s identity was finally revealed (although we had to wait until the second episode to see what Rachel saw in the pub). Disappointingly, the surprised expression on Rachel’s face was never properly explained. 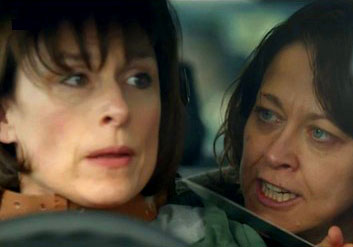 We had Ade leaving Janet, Janet’s mum moving in, Rachel getting married and swiftly separating from childhood sweetheart Sean. Sammy got engaged, Gill was carjacked at knifepoint and there was a grisly ongoing Fred and Rosemary West-type investigation running right through the whole season.

I appreciated the new flashback technique, it really livened up what might have been a predictable linear storyline. The acting, as we’ve come to expect, was superb throughout. The direction was top-notch too.

But how did this season compare to season 2?

Personally, I could have done with a bit more Murray and a tad more humour. It was mostly very grim. As police work mostly is. But this is telly. I’m not asking for dancing girls and jugglers, but a little more mood-lightening wouldn’t have gone amiss.

Nevertheless, I still think writer Sally Wainwright is a screenwriting genius. The woman has such a knack with dialogue that I wonder if she spends all her time on the bus just listening to other people’s conversations.

I do hope she finds the time to write a fourth series and all the actors can squeeze it into their busy schedules. Episode 8 can be found on ITVPlayer until 15th June.