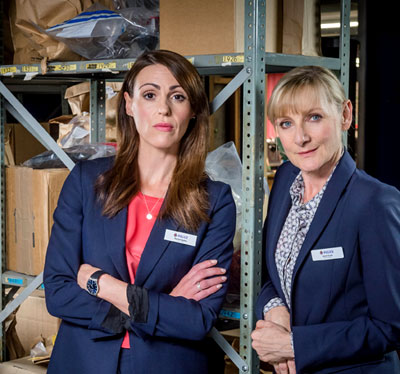 And we’re off. Setting up some healthy rivalry between our two heroines from the opening scene, it seems like series four should more accurately be entitled Scott or Bailey.

Interviewed by the promotions board, Rachel and Janet battle it out for the upcoming DS vacancy at Syndicate 9. If you haven’t seen the first episode yet, I won’t spoil it by telling you who got the gig, just to say there’s plenty of potential for drama with envy and resentment already starting to bubble to the surface.

The rest of the team are all there, with a welcome cameo from guts-of-steel pathologist Scary Mary Jackson. The exterior of the police station itself seems to have changed though, while the interiors remain the same. Mildly discombobulating for long term fans. But I’m sure we’ll forgive them.

Although the main investigation wasn’t packed with plot twists for your regular TV mystery fans to get their teeth into (and in the Cagney and Lacey tradition, that’s not what this female buddy cop show is all about), it did serve as a suitable back drop for the main event: the change of dynamic in Janet and Rachel’s relationship. The case also nicely set up a new ongoing investigation that will test the skills of the Syndicate 9 detective sergeant.

You can catch up with the first episode here on ITV Player.