You… and me always… and forever.

Yes, nice choice of song. Something had to break the frosty silence between Janet and Rachel on their way to deliver a ‘death message’ together the day after Rachel’s latest (and worst) indiscretion.

Intent on self-destruction, Rachel managed to think of the worst person she could sleep with, then went right ahead and slept with him. Makes perfect sense now – she had to get Sean out of her flat somehow, and telling him that she’d slept with Kevin Lumb worked like a dream.

Naturally, in Janet’s book, what Rachel did was unforgivable. Not just the Kevin element, but the fact that she shagged him not five feet away from the teenage Taisie Scott, the girl who has turned idolising Rachel Bailey into a new religion.

It seems Janet isn’t a huge fan of the whole concept of forgiveness. Her relationship with Rachel is in tatters and there seems no way back for them after the huge barney they had in Janet’s car, post Kevin-gate. Screaming match doesn’t really do it justice. 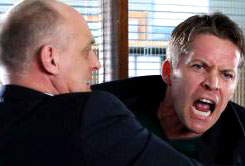 No way back for Sean and Rachel either: she’s burning all her bridges and seems to delight in dancing around the flames.

So how will it all end? We’re nicely set up for the season 3 finale. You can catch up with episode 7 on ITVPlayer.

Interesting to see ITV trying to sell the final episode of the series to fans desperate to discover how it all pans out for less than the price of a cuppa (an expensive cuppa, mind). Were you tempted? If not, might you have been if you’d had to wait a whole week for the next episode, rather than a mere 24 hours? I’d love to know how many people succumbed.