I thought I’d give you a behind-the-scenes peek at some of the things that were in my head while I was writing the new book, Code Dead. It does contain a few spoilers, so make sure you’ve read the book before you read this post! Not read it yet? Get your copy here!

One. The book is set in the village of Uppermill, about twelve miles east of Manchester. It’s where my lovely friends Julian (to whom the book is dedicated) and Nigel live and run the most wonderful art gallery, the Weavers Factory. If you’re in the area, do pop in and tell them I said hello. They were both very lovely to Eva when she was ill and I’m sure she’d approve of the dedication.

Two. This book was surprisingly hard to write. While my year in New Zealand will live long in the memory, I have found it very difficult to settle here, which is why this book took a couple of months longer than it should have. I’m hoping that the move back to the UK in a few months’ time won’t be nearly as disruptive. 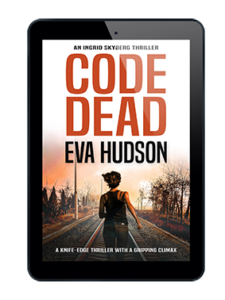 Three. I’m relying on the fact that you are familiar with Avril Lavigne’s Sk8r Boi. I had to be very careful not to quote the lyrics because sometimes a quote can cost an author a LOT of money. www.theguardian.com/books/2010/may/01/blake-morrison-lyrics-copyright Not sure you’ve heard the song? I have a feeling that when you click on this link you’ll realise you have. https://www.youtube.com/watch?v=TIy3n2b7V9k

Four. As well as utterly neglecting to get the Weavers Factory into the plot, I never explained why the tall cop’s nickname is Burj. But you worked that out all by yourself, didn’t you? https://en.wikipedia.org/wiki/Burj_Khalifa

Five. This isn’t the first time Fisher Krupps bank has appeared in the Skyberg novels. I’m sure many of you will have picked up on the fact that it is also the setting for the opening chapter of Kill Plan, where a trader is found dead in the office. Bonus points awarded to anyone who also knew that Fisher Krupps first featured in one of Eva’s earlier books, The Senior Moment. I remember Eva trying to come up with a name of a prestigious bank, and was inspired by the Fisher Landau art gallery in New York. I’m fairly sure the ‘Krupps’ part came from our kitchen coffee grinder.

Six. At the end of Look Twice, the previous book, Ingrid uses a colleague’s apartment for a set-up to lure a locksmith in for questioning. Her colleague tells her that their landlord is putting the apartment up for sale. So, yes, Ingrid has bought the very same property! A gazillion bonus points for spotting that one.

Seven. I wanted to include a non-binary character. Use of ‘they/them’ pronouns is often harder in print than in conversation because our brains see ‘they’ and have an expectation of how the sentence will resolve. I felt it was important to have a non-binary character and for it not to be a big deal for any of their colleagues. Even Mike Stiller was on board, so that’s a feather in the cis white hetero male cap. (7a Eva actually worked with a Ren Reynolds at the Department for Education – the inspiration for her first book, the Loyal Servant, but that Ren was definitely male. If he’s reading this, I hope he doesn’t mind that I totally used his name.)

Eight. I didn’t invent Ingrid, and every now and then I find myself wishing that Eva had made some different choices for her protagonist. One wish is that she’d given Ingrid more family so that I could put them in jeopardy and Ingrid could rescue them (spoiler alert: Svetlana will feature in Book Ten). That’s partly why Carolyn has smuggled her way into Ingrid’s London life. There’s a famous screenwriting book called Save The Cat, and Carolyn is definitely there to perform cat-like functions in future plots. 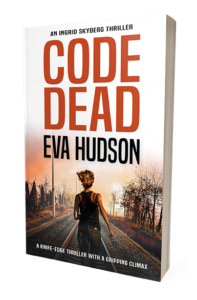 Nine. The other thing I wish Eva had done differently was given Ingrid a different specialism. For some reason known only to her, she decided that Ingrid’s special skill is languages and made her fluent in Russian (her mother’s native tongue), French and Italian. In reality, an agent fluent in French or Italian would likely be posted in Paris or Rome, so I was pleased Ingrid got to use her Italian in this book for something more than ordering food!

Ten. I think we’re all pleased that – finally – Ingrid got to repay a favour for Mike Stiller. Mike has been on the end of a phone for Ingrid more times than I remember, so it was about time he called in his IOU. Eva’s mum, who died a few years after she did, was very fond of Mike, so I hope she’d approve of Mike’s bigger role in this book.

Eva’s mum was also very fond of Nick Angelis. I think he might be due for a return to frontline action…