Ten things I want you to know about Flight Risk

The new Ingrid Skyberg Mystery is published on Thursday (January 14th), and as the book hasn’t had the easiest path to publication, I thought I’d give you a little behind-the-scenes. Here are ten things I want you to know about Flight Risk, without a single spoiler. And if this makes you want to read it, click here to buy it at the special launch price of $2.99/£1.99.

ONE
When Eva died, she left an unfinished manuscript (which became Shoot First) and notes for several more Skyberg novels. Flight Risk wasn’t among her notes, but a couple of years ago I was meeting a friend for a drink near the Southbank in London and I turned a corner into America Street, a short lane that runs alongside the railway tracks going into London Bridge station. And then I remembered something Eva had told me. She’d had an idea for a Skyberg novel that she’d given the working title of ‘America Street’ and the loose idea, as best I could remember it, was that George Clooney had run over and killed someone on America Street and Ingrid was somehow involved in assisting either him or the Metropolitan Police. 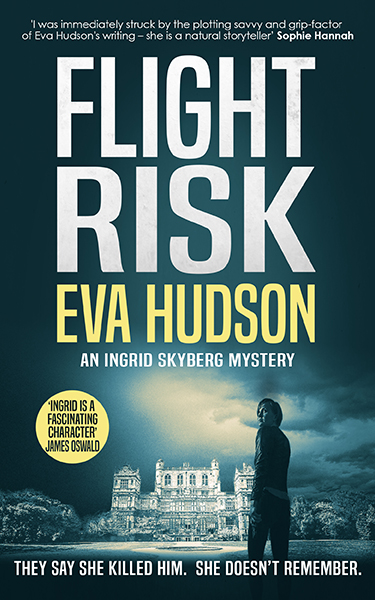 TWO
When I got home, I pulled Eva’s laptop out of the cupboard, charged it up, and searched for ‘America Street’ and found a file she’d created in Scrivener, a software package used by lots of novelists. There wasn’t much in the file, no more than 150 words, none of which were especially helpful. One of Scrivener’s features is that it lets writers store their research notes, and in the research folder I found a link to a news story about a diplomatic families keeping slaves in London, and then claiming diplomatic immunity to protect them from prosecution. I didn’t remember Eva ever talking about that, and I really didn’t know how that idea related to the hit-and-run.

THREE
I’ve enjoyed the challenge of taking Eva’s notes and turning them into full length novels. For me, part of the joy of the legacy she left me is making sure I use of every single note and outline she left before I write the last book in the series (which Eva was quite detailed about). As I’m not nearly ready for the series to end, I decided to use everything in those 150 words. She’d given me three elements – a powerful American citizen killing an innocent person, diplomatic immunity, and human trafficking – and I set about creating a plot from them.

FOUR
Eva’s scrivener file didn’t contain any mention of George Clooney, and I already knew that she would never have intended to use the actual George Clooney. His name was just a placeholder until she’d created a fictional cypher. The element I knew I had to keep was this: she would have chosen George Clooney because everyone (well, most readers) would think of him as hero and would struggle to square their image of him with the face he had just done a terrible thing. It’s a trick crime writers use all the time: nice guys you never suspect often turn out to have a dark side or a sinister secret. I now needed to find a character that Ingrid thought was a hero, and then give them a black heart. I don’t want to give the twist away, but someone she has long looked up has loses their halo by the end of the book. As a little nod to Eva’s original idea, I also made sure George gets a tiny mention.

FIVE
The previous book, Final Offer, left Ingrid at a low point. I honestly felt that she could have gone anywhere at that point, but as I have Eva’s notes for future books, I had to find a way of keeping her in London. The simple way to do that was to have her be the one accused of causing death by dangerous driving (I think the same crime in the States is called ‘reckless driving’) so that she can’t leave the country until she’s cleared her name.

SIX
I wasn’t sure for a long time how I would link the road accident and the human trafficking, but a common trope in crime fiction is a reluctant witness, so that was my first clue on how to dovetail these two elements. And once I had that, the rest of the plot came together pretty easily: Ingrid has to clear her name, and the one person who can help her do that is too scared to speak.

SEVEN
Eva always said that ‘George Clooney’ was riding a motorcycle (apparently lots of celebrities ride as the helmet gives them anonymity). But after Eva died, I did the classic middle-aged grief thing of learning to ride a motorbike. One of things I learned that Eva wouldn’t have known, is that it’s impossible to hit a pedestrian hard enough to kill them without coming off the bike yourself. That revelation took the plot in a slightly different direction. (And, by the way, I no longer own a bike. Way too dangerous.)

EIGHT
I was nearing the end of the first draft when news of Harry Dunn’s death broke. For those of you not familiar with the story, Harry was a nineteen-year-old rider in rural Suffolk who was killed by an American woman. She escaped prosecution by claiming diplomatic immunity due to the fact her husband worked at a nearby American Air Force base. I worried readers might think I was exploiting the tragedy, but although Flight Risk has some of the elements of the Dunn case – a motorcycle accident, a powerful person responsible for the death, and diplomatic immunity – I didn’t feel the similarities were enough to re-write the plot. To this day, the woman who admits to killing Harry has not been prosecuted after she fled home to the States.

NINE
Flight Risk was actually ready for publication over a year ago. As some readers will know by now, I had a deal with a publisher that didn’t work out. This book was meant to be part of that deal, which is why it’s been on ice so long. It feels VERY good to finally be releasing it into the wild.

TEN
This is Book 7 in the series and marks an uncomfortable turning point: I have now written more of the books than Eva did. I still feel very much that these are Eva’s books and that Ingrid is her creation, but I am building a greater confidence and sense of ownership over the series. And now that I’ve got the rights back, I feel really optimistic about Ingrid’s future. I’ve already started writing Book 8…