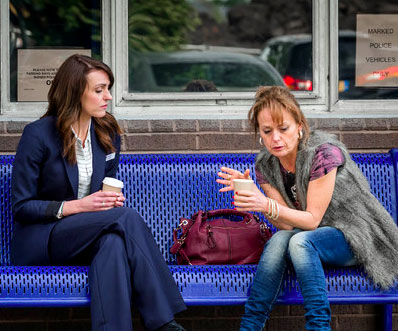 It had to happen – Sharon Bailey was just waiting in the depths to resurface. Rachel’s life was going too well. Granted she’s still struggling with her new role, and Godzilla isn’t cutting her any slack, but she’s finally got herself on track. The greasy pole awaits.

Then along comes Sharon.

The character is just too much of a gift not to bring back. Tracey Bennett does a blinding job as the washed up, drunken, emaciated woman who abandoned Rachel and her siblings when they were still children, leaving them with an abusive and useless father. And now she’s hooked herself up with another man who’s not going to win any boyfriend of the year awards.

It’s a storyline that will no doubt haunt Rachel for the remainder of the series, and you get the feeling it’s not going to end well.

The crime that was investigated was a tad meh, but it served a purpose. But what was all that stuff about Gill Murray repeatedly forgetting a witness’s name? Please tell me the writers aren’t planning to add some dementia element to the plot.

I want to see Gill Murray have her own spin off series – as a PI or maybe working on cold cases at the National Crime Bureau, where she belongs.

As ever the latest episode can be found on ITVPlayer.