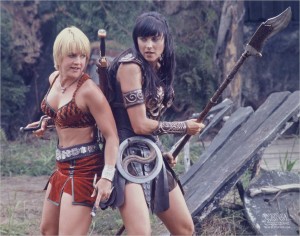 I could have chosen a pic of Kelsey Grammar, but figured two women kicking ass was much more appropriate!

I don’t know about you, but I do like to read stories that are interconnected, where a character in one series pops up in another. I suppose it’s an extension of the successful TV series spin-offs: Frazier from Cheers, Melrose Place from Beverly Hills 90210, Angel from Buffy, and Xena from Hercules (now there’s a window into my viewing habits!).

So it makes sense that I have written two series where the same kind of overlap occurs. Even the standalone novel, The Senior Moment, features a major character from the first book in the Angela Tate Investigations series, The Loyal Servant (Jean Henderson is Caroline Barber’s mum).

Angela Tate herself crops up in the Ingrid Skyberg Thrillers series, as do DC Ralph Mills (The Loyal Servant and The Deadly Silence [formerly The Third Estate]) and DI Natasha McKittrick (The Deadly Silence).

There are plenty of other interconnections too, so I thought I’d make a comprehensive (and slightly nerdy) list. And as characters are traditionally listed in order of appearance in movies and TV shows, I’ve decided to ignore that completely and go for an alphabetical list.

It’s not a real pretty list, if I had the skills, I’d create a fabulous infographic, but unfortunately…

This list will be added to with the publication of new books. If you have a favourite character from one of the series, you might like to see how they played their part in the other.

If I’ve missed anyone off the list, please let me know!