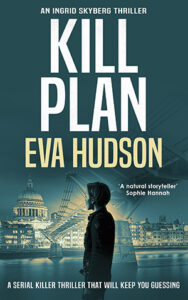 A banker is found dead at his desk in the City of London. Then a heavily tattooed body washes up in the Thames. Now someone is after Ingrid. At first these crimes seem unrelated, but they are all the work of an audacious serial killer working on both sides of the Atlantic.

Special Agent Ingrid Skyberg, the FBI’s criminal investigator in London, is one of the toughest agents ever to come out of Quantico. She’s resilient, resourceful and a bit of a renegade, but she’s never been tested like this before. With no help from her colleagues at the US embassy, Ingrid is running out of time to unmask the killer before he strikes again. But she can only do that if she can stay alive.

Unlock the thrills and twists of this up-all-night thriller series, perfect for readers who have ever wondered if there’s a female version of Jack Reacher. There is, and her name is Ingrid Skyberg.