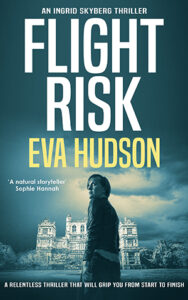 Buy now
They say she killed him. She doesn’t remember.

Special Agent Ingrid Skyberg is ready to walk away from her life in London. She’s at rock bottom and even wants to leave the FBI. But when Ingrid attempts to board a flight at Heathrow and sneak away without telling anyone, she’s arrested for killing a man she’s never heard of.
Now Ingrid must stay in the country, and the FBI, to prove her innocence. Unfortunately for her, the only witness who can clear her name is too afraid to talk.
Up against powerful forces who plan to silence Ingrid—permanently—rather than let the real killer pay the price, Ingrid digs deep to uncover a deadly game of blackmail that threatens national security. With dignitaries arriving in London for the ambassador’s Christmas ball, Ingrid doesn’t have a second to waste.
Flight Risk takes readers on a jet-propelled ride through the English countryside and the Portuguese Algarve before detonating in an explosive conclusion in the center of London.