How not to write a novel

That’s not strictly accurate, I have actually managed to finish The Third Estate, and it’s about to be published, but the process I used to get to this point has been long and arduous. It’s not a method I would recommend. 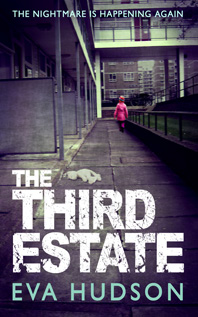 You see, I started out with a theme.

It was one of those subjects I couldn’t shake off – I’ve wanted to write this book for a very long time.

The Theme
I grew up on a council estate. It was always something I kept quiet about. In the seventies and eighties there was a stigma attached to it. Then Right To Buy came along and suddenly your council house could get you on the property ladder. And then up a few rungs and off the estate entirely (not something my family did, by the way). So, the socially mobile working class shook off their social housing roots and moved on.

But what did that mean to the people left behind? The ones on sink estates in Peckham? High rises in Glasgow? Or sprawling housing complexes on the edge of the Yorkshire moors? Not only were they ignored by politicians and town planners alike, but they (and I suppose I mean me too) were labelled Chavs and scroungers – a new underclass. Sweeping generalisations were made about everyone living in social housing.

What about the people struggling to make ends meet, juggling two or three low-paid jobs? Or those too sick to work? Or unable to get any kind of work because the work just doesn’t exist? What about all those families helping their kids through school as best they can? They might once have been called ‘salt of the earth’ working class. But now they are pretty much universally branded the ‘undeserving poor’.

I’ve got to admit, it really wound me up. Just like putting kids who receive free school meals into their own category, assuming they’d be educationally disadvantaged from the get-go.

The process
Rather than just getting angrier and angrier about the injustice of it all, I decided the only thing I could do (short of standing for election) was to work the subject into a novel.

I already had a lead character (Angela Tate from The Loyal Servant), all I needed was a plot. Sounds relatively straightforward. Needless to say it was anything but. Character motivation was all over the place, plot twists happened too randomly and cliffhangers weren’t properly resolved. It was a mess. I wound up completely rewriting the first draft (all 85,000 words of it) then redrafted and edited it over and over. So many times I’ve lost count.

It wasn’t really much of a process at all. It would have been much better to have started with some characters stuck in an impossible situation, or searching for an impossible goal, and allowing the theme to evolve alongside the plot more organically. That’s the theory, anyway. One I might try for the next book!

The Third Estate
The original title was The Evening News – after the London evening newspaper that ceased publication in the eighties. It’s the paper my lead character works for. But it didn’t really convey the story. Then I started doing some research on class (on Wikipedia, where else?) and discovered how France labelled its population for centuries before the revolution. Here’s a breakdown:

As The Third Estate pretty much described the people living on the Shakespeare Estate in the novel, and the Shakespeare is one of three 1950s-built council estates nestling in a small corner of south-east London, a new title was born. One that fitted perfectly.

Publication
Despite the endless plot wrangling and character wrestling, I am now very pleased with the finished book and thrilled that The Third Estate will be published in ebook on 15th August, with the paperback following swiftly behind.