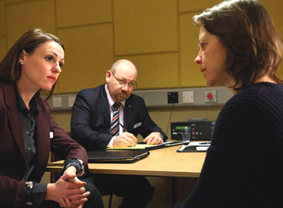 Wow! That was quite something. Continuing to use the flashback technique at the beginning to throw viewers right into the story, last night’s episode saw the return of Helen Bartlett, played by the uber-talented Nicola Walker. Now there’s a tough decision for next year’s TV BAFTAs – who’ll win best actress – Olivia Colman or Nicola Walker? I suppose Colman could get best actress and Walker best supporting actress (when will she get her own starring role?)

Enough digression. Back to the plot. Gill Murray took a backseat last night because of the severity of the case, so Det Supt Julie ‘Slap’ Dodson claimed centre-stage, and a fine job she did too. Great to see another strong female character – even the assistant chief constable was a woman! Red Productions and ITV – you spoil us!

Looking more and more like a gruesome Fred and Rosemary West investigation, with multiple human remains discovered in the cellar of Eunice and Joe’s house, suspicion was cast on Helen Bartlett once again – was she coerced into abusing the victims or a willing participant? Next week’s episode should reveal all.

Here’s a sneak peek of episode 5 courtesy of ITV – don’t watch if you hate spoilers.

In the meantime – congratulations Sally Wainwright and Juliet May (director of episode 4) – the show goes from strength to strength.

Episode 4 available on ITV Player until 24th May